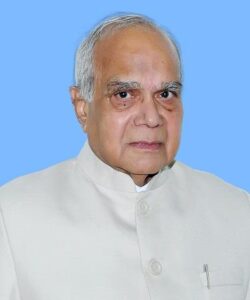 Mr Ajay Singh, Headmaster, The Punjab Public School has hailed the appointment of Shri Banwarilal Purohit as the Governor of Punjab & Administrator, Union Territory, Chandigarh on September 9, 2021. Shri Purohit, who is an eminent educationist himself, takes charge as the Chairman of the School Board of Governor. Shri Purohit is credited with having revived ‘The Hitavada’, an English Daily founded by Gopal Krishna Gokhale, the mentor of Mahatma Gandhi. He expressed the hope the school will benefit immensely from Shri Purohit’s experience and touch new heights under his guidance.

Shri Banwarilal Purohit is a political personality having shaped public affairs in a big way for last four decades. Shri Purohit has been three-time Lok Sabha member from Nagpur and Managing Editor of ‘The Hitavada’, Central India’s oldest and largest circulated English daily for last one hundred years. He is an eminent educationist, a renowned social activist, institution builder, nationalist thinker. Shri Purohit, a well-known public figure with spotless image has been in active public life for more than four decades making a mark in the social, political, educational and industrial fields in Central India.

Born on April 16, 1940, Shri Purohit, did his schooling from Bishop Cotton School, Nagpur and from Rajasthan. He obtained his commerce degree from Nagpur University. He was quite interested in active politics and decided to contest elections to fight against persistent neglect of Vidarbha, a backward region of Maharashtra. Not surprisingly, he won the Assembly elections from Nagpur East segment in 1978 and from Nagpur South Constituency in 1980. In 1982, he worked as a Minister of State for Urban Development, Slum Improvement and Housing in the Maharashtra Government.

Shri Purohit was elected as Member of Parliament from Nagpur Lok Sabha constituency thrice−in 1984, 1989 and 1996 and was adjudged as the most active Parliamentarian with highest number of questions to his credit. Preferring spartan lifestyle and simplicity, Shri Purohit always remained a leader loved by masses.

As Member of Parliament representing Nagpur Lok Sabha Constituency, Shri Purohit lived up to the expectations and proved his mettle as an alert member. He raised every possible important issue that came up not only in his constituency or region or state but anywhere in the country.

As a member of the Parliamentary Consultative Committee  of the Defence Ministry, Shri Purohit contributed significantly to the thought-process on National Defence and Security. He participated and represented the nation in esteemed 96th Inter-Parliamentary Conference held in Beijing (China) from 16-20 September 1996.

Shri Purohit was also associated with Parliamentary Consultative Committee on Home Affairs and was a Member of Standing Committee on Defence and Member of Public Sector Undertaking Committee. His memorable fight against allotment of coal blocks to private players earned him a marvellous certificate from Hon’ble Bombay High Court which recognized him as someone for whom “law is as dear to his heart as it is to lawyers and judges”. He was praised for saving precious natural resources from going into private hands for pittance.

One of the most important contributions of Shri Purohit is revival of ‘The Hitavada’, an English Daily founded by Gopal Krishna Gokhale, the mentor of Mahatma Gandhi. It was because of his leadership that ‘The Hitavada’ has become a leading newspaper of Central India, whose voice is heard across the country.

Shir Purohit has been associated with many social, charitable, religious and sports organizations and has generously donated for the cause of education and social work. He is National Trustee and Vice-President of Bhartiya Vidya Bhavan, one of the premier societies running more than 250 educational institutions across the globe and publisher of some of the most popular books on Indian History, Indian Culture and its civilizational heritage and has published 2050 titles and sold 33 million copies so far. He is the Chairman of Shri Ramdeobaba Smarak  Samiti, which runs Shri Ramdeobaba College of Engineering and Management, one of the best engineering and management colleges of Maharashtra. He is also associated with another premier educational institution, the Women’s Education Society, which runs Lady Amritabai Daga College for Women of Arts, Commerce & Science and Smt Ratnidevi Purohit College of Home Science and Home Science Technology.

Shri Purohit has served as Governor of Assam from 22nd August 2016 till 5th October 2017 and was also holding additional charge of Meghalaya. Shri Purohit assumed office of Governor of Tamil Nadu on 6th October 2017. He has led a high-level official delegation of Republic of India in 4th Edition of Prestigious “SAMVAD” initiative on ‘Shared Values and Democracy in Asia’ held in Tokyo, Japan in July 2018. He addressed the eminent personalities of both the nations in his opening address. He assumed office of Governor of Punjab & Union Territory, Chandigarh on September 9, 2021.